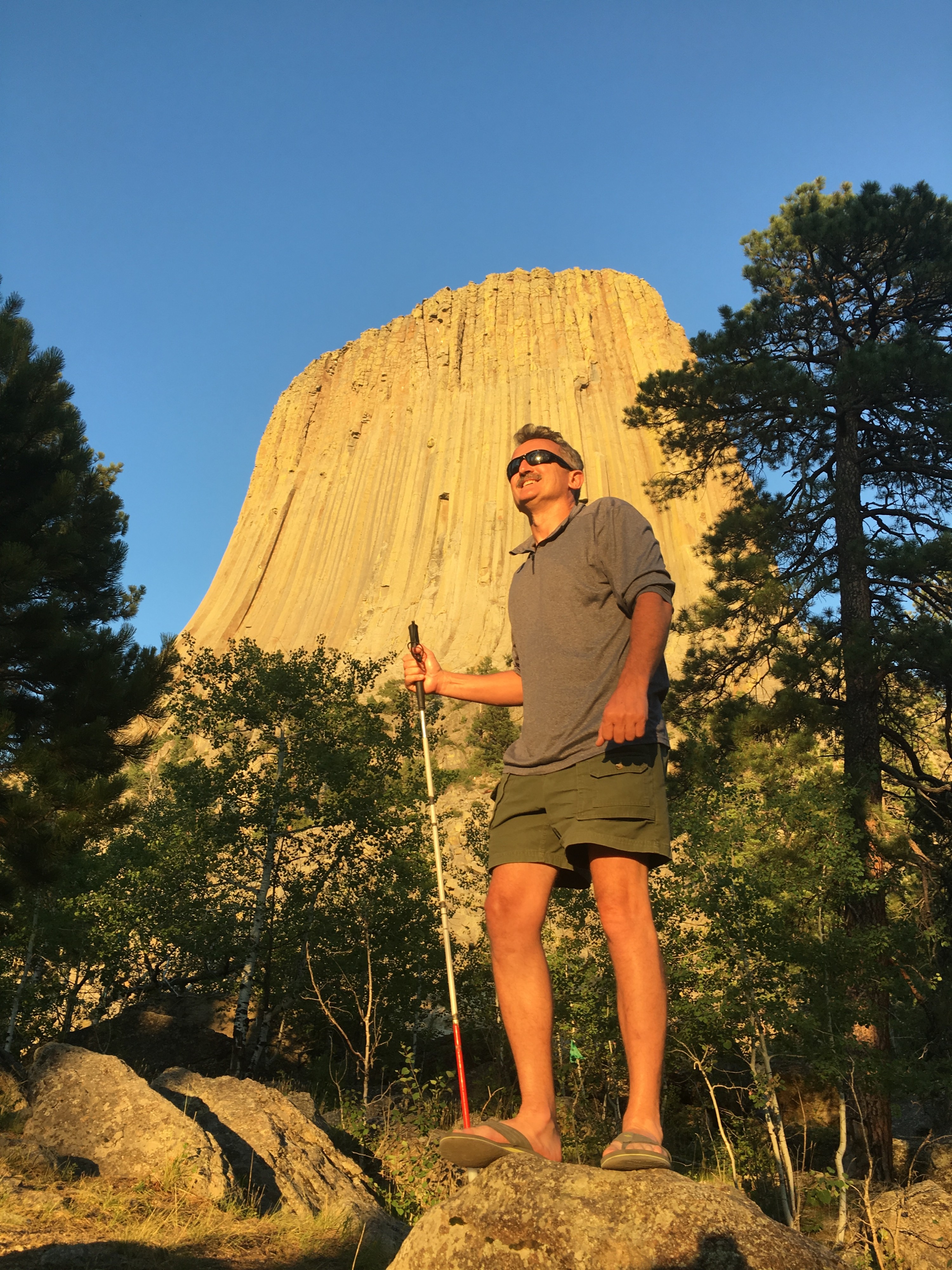 Standing at Devil’s Tower ready to attempt to fulfill a dream 30 years in the making.

Blog by Lonnie Bedwell
8/10/2017
All photos by Timmy O’Neill. Click on photos to view larger.

Have you ever had a dream and wondered if it would come true? Back in 1987, I remember cruising across Eastern Wyoming in a Ford Tempo. It seemed like out of nowhere, this huge rock formation just appeared on the horizon. I was in awe of its size and beauty and wondered why it was the only thing around like it. “Devils Tower” is our nation’s first national monument. It rises 867 feet from its base to its summit. As I passed by, I wondered if people ever climbed it, and if so, how? Since I wasn’t too much of a movie buff, I never saw “Close Encounters of the Third Kind” but I did see it in person a few more times passing by driving to and from Indiana to Idaho where I was stationed in the military. Each time I passed I began dreaming I was standing on top looking out at whatever the view may offer.

A half dozen years ago, I began to be introduced to adaptive sports and rock climbing was one of them. Fast forward to 2014, I met Timmy O’Neill at the Grand Canyon for my second descent kayaking the CO River. At the time, I had no idea that he was a world class climber. He had me climbing using “top rope” in one of the side canyons during that kayak trip. The more I got to know him over the past couple of years, I mentioned to him my dream of being on top of Devil’s Tower.  I can still visualize that dream of being on the summit in my mind. It wasn’t much more than a month ago, Timmy stated that I should stick around a few extra days after an event we were doing in Colorado. If I did, he would drive us up to the tower and we could climb it. 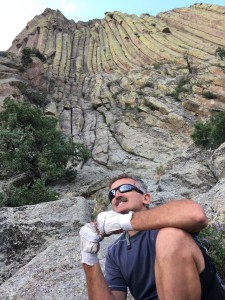 Tape gloves on and feeling so excited and ready for the climb.

We got there Friday evening a little before sunset and he began describing what he saw. With a huge smile on my face, images began flooding my mind. As I sat in the tent that night, I couldn’t believe this was happening! I wanted to get up at the crack of dawn and get started. Timmy planned on a little later start; the anticipation of getting started was torturing me – I was so excited!

Finally, we were in the parking lot at the base of the tower, July 29 2017, thirty years after I saw the tower for the first time. I sat down and started putting on my climbing shoes. Timmy looked over at me and began laughing as he asked “What are you doing?!” He continued chuckling and explained that you don’t put them on until you are at the base of the climb after hiking up the approach. A little sheepishly I replied “I thought we were right at the base of the climb… I can’t see it, you know! haha” I’m a total novice; I’ve only climbed a handful of times outdoors and this is my very first time ever doing a multi-pitch climb. (For those of you who don’t climb, you can google what that means. LOL)

Finally, we were at the base of our climb. Timmy chuckled again and said “Now you can put on your climbing shoes.” As Timmy looked up at the wall he realized we would be doing a large amount of crack climbing. He also knew that I had completely destroyed my hands a few months earlier trying to crack climb in a gym. Since I didn’t have any gloves that you wear for this type of climbing, Timmy created “make shift gloves” for me out of tape. To begin with, we weren’t sure how they would hold up. Thankfully, they lasted all day and worked great! After humbly putting on my shoes, I also put on my harness, helmet, a chalk bag, and my small pack with a few layers of clothes – weighing in probably less than 5 pounds. Meanwhile Timmy put on a backpack full of food, water, supplies and everything but the kitchen sink, along with a rack full of gear and two 70 meter ropes – easily weighing over 50 pounds! Did I ever feel like a lightweight!

We had to climb a little over 100 feet before we got to the beginning of the Durrance route, the route we would take to the summit. We began our climb around 11:00 in the afternoon. After climbing the first 40 feet we stopped and Timmy was a little perplexed to say the least. He realized that I was pretty much clueless about this kind of climbing. He said “How did I miss the memo that you really don’t know what you are doing?” To which I thought, “I don’t know, but I’m glad you did because it got us here!” After thinking through it for a minute, he started explaining to me how to place and take out the cam anchors, where and how to place them on my harness as I cleared the route, how to properly place my hands and feet, and the list goes on. I thought he might want to turn around but instead he calmly said “Well Lonnie B, we’re going to do this. I have a head lamp.” So we did 2 more mini pitches and reached the beginning of the Durrance route. He fixed my “make shift” gloves again, gave me a little more instruction, and off he went. He set cams as he climbed lead and I was to follow the rope to find my route and clean it of all our gear on my way up. After each pitch he would take all of the gear back and go off again up the next pitch. 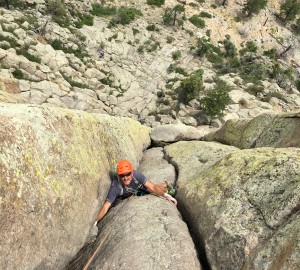 I was definitely taking a good butt kicking trying to figure out where to place my feet and hands. Should I be full in the crack, or the chimney, outside the crack, or a combination of both? We went up a somewhat wide chimney section where I worked myself up by pressing my back up against one side of the “chimney” with my feet on the other side. It was so cool to experiment and learn different techniques. It was about three quarters of the way up the next section that I almost bonked (passed out). I knew better and Timmy had been telling me that I needed to eat, but I didn’t. I was so into the moment and the reality of fulfilling this dream, that I didn’t feel at all hungry even though I knew I was burning calories. I finally caught my breath and very slowly made my way to the ledge above. I truly wasn’t sure my body was going to let me press on. Timmy filled me with shot blocks, energy bars, and water. After several minutes of rest I recovered enough to keep going. It also helped to know we just finished what was considered the “crux” (the most difficult section) of the climb based on beta we got from other climbers on their way down.

The next tricky section came when we had to drop down below a rock onto a small ledge and move across an opening to another ledge. I have no idea how Timmy got across that gap! I could hold on to the first piece of gear on one side of the gap and grab the gear the other side by swinging, but I couldn’t figure out how to climb across that gap. I ended up releasing my rope from the first gear, hold the rope and then let go. I swung like a pendulum into the rock just below the ledge on the other side and crawled up. I made it! I was amazed because Timmy had to climb back across the gap to recover the gear I left behind then come back again. I still can’t figure out how he did it! 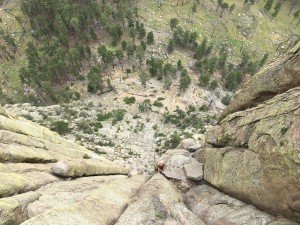 An awesome view of the massive columns of the tower.

Just a few yards later we passed through a small cave in the rocks where Timmy had to make another crucial decision. It looked like it was going to rain. Should we stay there for a while? Would the rain hold off or hopefully go around us?  Or should we move on up? The grade was not near as steep and we only had a little over 100 feet of elevation to go. He decided to press on. After 12 mini pitches we had all but reached the top. Timmy decided to have me lead the last 30 or 40 feet. I think he had me lead for more than one reason. First, I’m convinced he knew there were small cacti up there and he wanted me to put my hand on one… which I promptly did. Thanks Timmy!! Kidding aside, I know why he did it. He wanted me to have the summit. This dream I’ve had for so long and he wanted me to fulfill it. He was saying, “go get it friend. It’s yours. We did it.” I can’t thank you enough buddy, and I will always be eternally grateful. 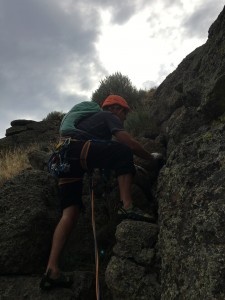 Timmy giving me the summit. I led the last pitch!

After 30 years, the view might not be what I was expecting, (LOL) but it does prove to me that you should never give up on your dreams. You never know when they might become reality. It gives me hope to hang onto the dream that I will see it someday. When my next dream becomes reality, I hope Timmy will be there too. 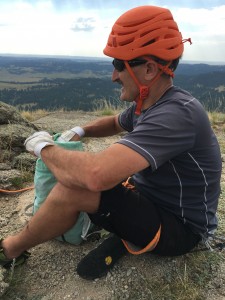 P.s. Timmy didn’t need that headlamp, we were back down well before dark. 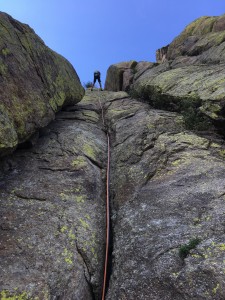 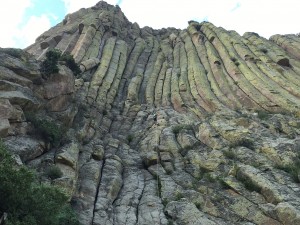 Can you find me rappelling in this shot? LOL